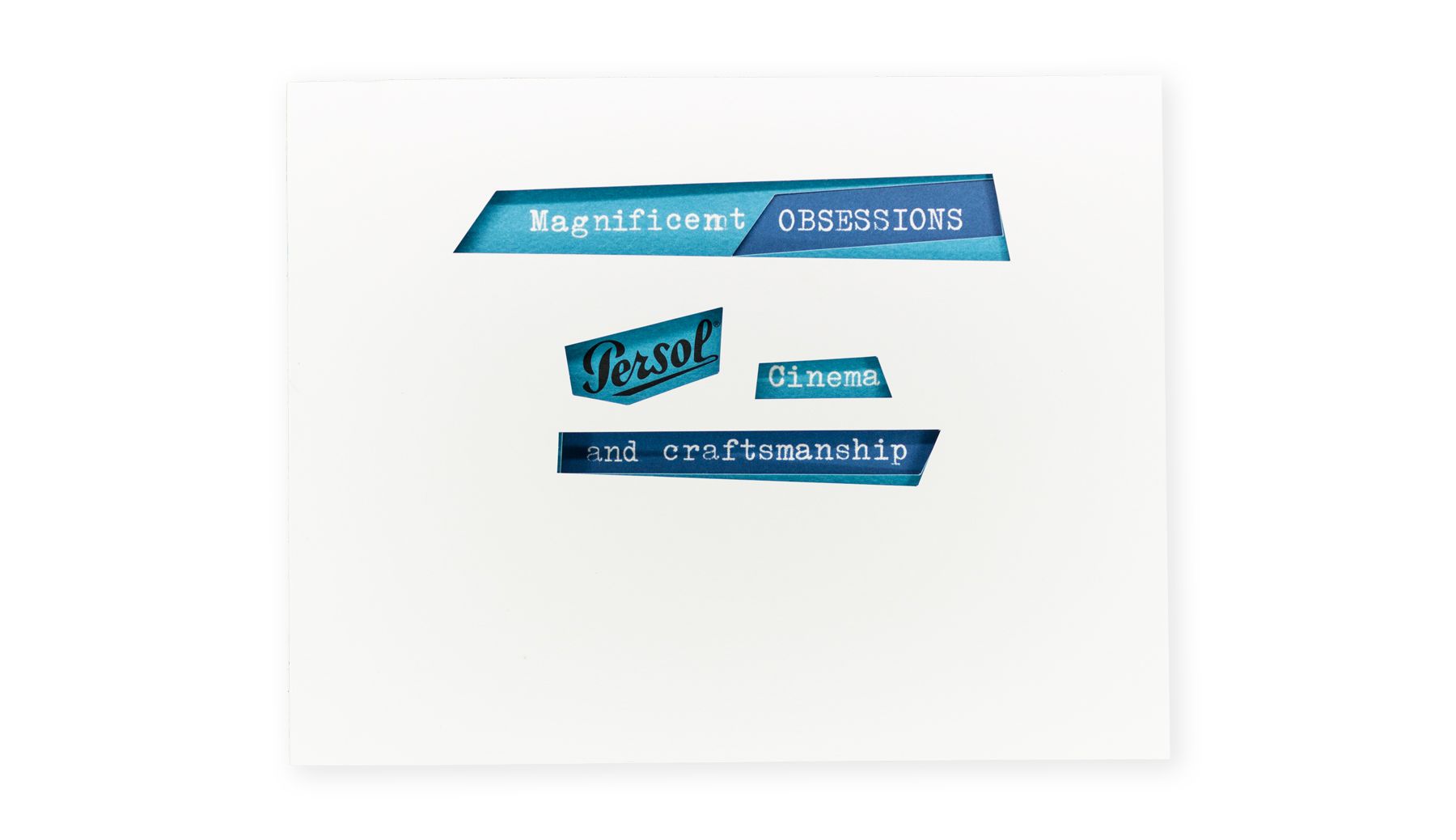 Magnificent Obsessions. Persol, cinema and craftsmanship comes to its third volume celebrating the ten new stories of obsession featured in the exhibition PERSOL MAGNIFICENT OBSESSIONS: 30 stories of craftsmanship in film curated by Michael Connor and on view at Museum of the Moving Image (New York) from July 11 to November 10, 2013.

The filmmakers featured in Magnificent Obsessions. Persol, cinema and craftsmanship 3/3 share the same commitment to authenticity and dedication in their workmanship as Persol does in the handcrafted process behind the production of a pair of glasses.

The exhibition, and this book, will explore the many steps – from an actor’s immersion in character research to the precise detailing of a costume designer – that go into creating a cinematic icon. Characters, sounds, visuals, scenes, costumes, props: the exhibition will showcase how each takes hours, weeks or months of research and devotion to develop.

Among the celebrated stories in Magnificent Obsessions. Persol, cinema and craftsmanship 3/3 are those of: the Oscar®-winning director Ang Lee, who has made a career of confounding expectations – and succeeding – in ambitious projects such as Crouching Tiger, Hidden Dragon; the brilliant editor Walter Murch, who not only assembles films with great intuition and a keen understanding of structure, but who also revolutionized the use of sound in film, when he invented a craft now called “sound design” to express the surreal three-dimensional aural mindscape of Apocalypse Now; the cinematographer Slawomir Idziak whose understanding of light, color, and celluloid contributed to every element of the viewer’s understanding of Three Colors: Blue and its characters; production designer Jeannine Oppewall, whose design intuition, keen understanding of color, and commitment to authenticity created a compelling mimicry of reality in Steven Spielberg’s Catch Me If You Can; the actress Jennifer Connelly whose extensive preparation for her role in Darren Aronofsky’s Requiem for a Dream allowed her to embody and dramatize the hallucinatory rawness at the center of the film; the fearless actor Johnny Depp who captured the manic intensity of the character of Hunter S. Thompson in Fear and Loathing in Las Vegas; inventive screenwriter Charlie Kaufman and director Spike Jonze, whose close collaboration on Being John Malkovich brought the world of imagination to its fullest and most compelling realization in a film that had been dubbed “unmakeable”; Theadora Van Runkle, the larger-than-life costume designer, who rose from obscurity to fashion stardom with two films from the late 1960s, Bonnie and Clyde and The Thomas Crown Affair; costume designer Julie Weiss whose in-depth thought process allowed her to develop a nuanced understanding of the character of Frida Kahlo in Julie Taymor’s biographical film Frida; and the late, great designer Eiko Ishioka who created costumes that expressed Francis Ford Coppola’s fanciful operatic vision as he reinvented Bram Stoker’s Dracula.

Magnificent Obsessions. Persol, cinema and craftsmanship is the third of three volumes celebrating “magnificent obsessions”: tales of ardent passions and meticulous attention to detail that  have made the great films great.